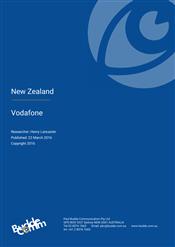 Vodafone NZ remains New Zealand’s largest mobile network operator, though the company has seen its share of the mobile market slip to below 40% during the last few years. In late-2012 Vodafone acquired TelstraClear from Telstra Australia, and later acquired the ISP ihug. These assets have enabled the operator to expand into the fixed-line segment and bolster its bundled service offerings. To this end, Vodafone has developed an IMS infrastructure to create a single fixed-line and mobile network. In addition to DSL broadband services, Vodafone is among the first operators globally to invest in the DOCSIS3.1 standard for its cable network, aiming to deliver 1Gb/s services.

The company’s 2G and 3G networks provide near national population coverage, while an upgrade to its LTE infrastructure completed in late 2015 extended coverage to about 85% of the population. Vodafone also hosts a small number of MVNOs.

Vodafone was selected by the government to roll out rural services as part of the Rural Broadband Initiative (RBI). In October 2015 the government announced a further $100 million for the RBI as well as $50 million to fill in ‘black spots’ in the mobile network. By the end of the year Vodafone under the RBI had covered about 280,000 premises, of which 102,000 were connected.

This report provides an overview of Vodafone New Zealand’s operating and financial performance to FY2015. It also assesses Vodafone’s market strategy in relation to the Ultra-Fast Broadband Network/RBI, and its ability to compete effectively in the country’s telecom sector following the consolidation of TelstraClear’s fixed-line assets.