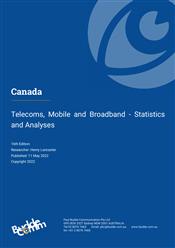 The Canadian telecom market continues to show steady development as operators invest in network upgrades. Much of the investment among telcos has been channelled into LTE infrastructure to capitalise of consumer demand for mobile data services, while there has also been further investment in 5G. Investment programs have also been supported by regulatory efforts to ensure that operators have spectrum available to develop 5G services. Spectrum in the 600MGz and 3.5GHz ranges has already been auctioned, while other auctions are planned through to 2024. In the 3.5GHz range the regulator set aside 50MHz for new entrants to encourage competition in the wireless segment.

There has also been a concentration of investment in fixed-line infrastructure, focussed on FttP and, among cable broadband providers, upgrades to the DOCSIS3.1 standard. This is having the effect that the DSL segment is steadily losing market share as customers are migrated to fibre. Telus expected to have completely decommissioned its copper network by the end of 2022.

Government policy has encouraged the extension of broadband to rural and regional areas, with the result that services are almost universally available and the emphasis now is on improving service speeds to enable the entire population to benefit from the digital economy and society. Cable broadband is the principal access platform, followed by DSL. The main cablecos are upgrading their networks to the DOCSIS3.1 standard, which can deliver data at 1Gb/s and above. Fibre deployments are also gaining momentum, with a growing number of Gigabit towns now connected.

The mobile penetration rate remains comparatively low by international standards, and so the market offers further room for growth. Canadians are well provided for LTE and LTE-A infrastructure. Despite topographical challenges and the remoteness of many areas, the major players effectively offer 99% population coverage with LTE. In the 5G segment, Telus and Bell Wireless were early triallists, followed by Shaw Communications in May 2018. Operators now provide up to 70% population coverage with 5G.

This report provides a broad range of key statistical data on the major telecoms segments, as well as developments in e-commerce and e-health, and policies which support the adoption of smart meters and the progress of smart grids. It provides an overview of each major sector, an analysis of market developments and an assessment of operator strategies. The report also covers the mobile voice and data markets, as well as the fixed-line and fixed-wireless broadband sectors.