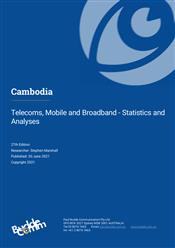 Cambodia waits on the government to release 5G policy

Cambodia’s mobile-dominated telecoms sector spent much of 2020 battling two major challenges: the global pandemic, and the government’s retraction of trial licenses for the rollout of 5G.

Citing concerns about wastage and inefficiency occurring if each operator built a separate 5G infrastructure in order to maximise their own network’s coverage (and, presumably, to capture greater market share), the regulator withdrew the licenses that the operators had been using for their 5G trials. This was despite all of the operators having already announced a successful completion of their trials. More than a year later, the market is still waiting on the government to release its 5G policy and roadmap, along with the allocation of spectrum and approvals to permit commercial operation. There is little expectation of any further progress happening before the start of 2022.

In the meantime, the mobile network operators have maintained their focus and investment strategies on upgrading and expanding their existing LTE networks around the country, and to 5G-enable their base stations. When the 5G market eventually arrives, the underlying infrastructure will at least be ready to support a rapid adoption of the higher-value applications and services.

Overall, the mobile market fell back slightly during 2020 and 2021 (in terms of total subscriber numbers) as the Covid-19 crisis wore on, but it remains in relatively good health as mobile users increased their data usage over the period. Likewise, the mobile broadband market experienced a small but very rare contraction in 2020, although penetration rates were already very high in this area. There is likely to be a quick rebound to previous levels once economic conditions stabilise, followed by a modest rates of growth over the next five years.

The number of fixed telephony lines in service continues to fall sharply as customers migrate to mobile platforms for both voice and data. The lack of any widespread fixed-line infrastructure has had a flow-on effect in the fixed-line broadband market, a sector that also remains largely under-developed.