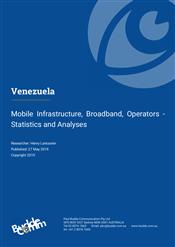 Mobile penetration in Venezuela is below the average for South America, while growth in the sector has been set back by the ongoing economic recession. The number of mobile subscribers fell 5.6% in the first half of 2018 as subscribers terminated services in a bid to reduce discretionary spending. The phenomenon was also seen in the fixed-line segment, where fixed-line connections dropped by 7.4% in the year. Part of the decline is also related to the large number of people who have fled economic hardship.

Nevertheless, there has been some growth in mobile data traffic, spurred by the popularity of social networks, the prevalence of smartphones and continuing investments from operators in LTE infrastructure despite difficulties in financing network upgrades and paying for equipment: Movilnet delayed launching its own LTE services until early 2017 because of its inability to purchase equipment from foreign vendors. In addition, mobile networks have taken up some of the demand previously met by fixed-line networks.

Three major players operate in the Venezuelan mobile market: Movilnet, the mobile subsidiary of state-owned CANTV, Movistar, the Venezuelan unit of Spain’s Telefónica Group, and Digitel, a locally owned private company. In terms of revenue, the mobile sector accounts for about 46% of overall telecom sector revenue, compared to 11.7% for internet services.

This report provides an overview of Venezuela’s mobile market, including profiles of the operators, an assessment of key market statistics and general analyses on a very difficult competitive environment.