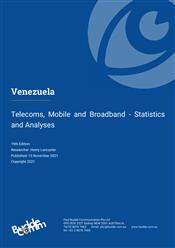 Venezuela’s fixed-line teledensity was relatively high for the region before the steady growth in the number of lines came to an end in 2015. Since then, the number of lines has plummeted, and by late 2021 teledensity had fallen to about 17.3%. The cause is largely linked to the country’s ongoing economic troubles, which have compelled many people to terminate fixed-line telecom services and others still to flee the country.

The financial concerns of customers have been exacerbated by the decrepit state of much of the fixed network, which has been hampered by the difficulty for telcos and infrastructure suppliers to pay for equipment from foreign vendors. This has resulted in a poor quality of service in many areas of the country. These pressures have also distorted sector revenue and have placed into disarray operators’ investment plans aimed at improving networks and expanding the reach and capabilities of new technologies and services.

The fixed broadband penetration rate is lower than the regional average, while data speeds are also relatively low. There is no effective competition in the provision of DSL, and as a result the state-owned incumbent CANTV has had little incentive to improve services from its meagre revenue streams.

Mobile penetration in Venezuela is also below the regional average. The number of mobile subscribers fell by an estimated 2.4% in 2020, year-on-year, as subscribers terminated services in a bid to reduce discretionary spending. This decline is expected to continue into 2022, with subscriber growth not returning until 2023.

The three MNOs Movilnet, Movistar, and Digitel have also had to contend with widespread theft of equipment and with erratic electricity supply to their remaining base stations. Movistar has also been hit by currency restrictions and has depended on support from Telefónica Group to stay afloat. Nevertheless, it seems determined to remain in the market.

This report provides an overview of Venezuela’s telecom infrastructure, market, and regulatory environment, together with profiles of the major fixed-line operators. It also provides a range of statistics and market analyses. The report also reviews the fixed and wireless broadband markets, as well as the mobile market, including an assessment of key market statistics and general sector analyses on a very difficult competitive environment.