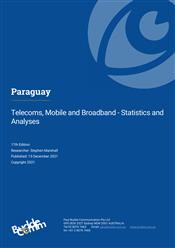 The state-owned incumbent, Corporación Paraguaya de Comunicaciones (Copaco), retains a monopoly on all fixed-line voice services, including local telephony, international long-distance telephony, and VoIP. In the mobile market, however, there has been effective competition since 1998. The internet market is also open to competition, and there are over a dozen ISPs offering services. Copaco lost its monopoly over the international backbone for internet connectivity in early 2009.

The mobile market is served by four operators: Tigo (the market leader), Telecom Argentina’s Núcleo, América Móvil’s Claro, and Copaco’s Vox. Operators have capitalised on the opportunities created by poor fixed-line infrastructure, and by growing consumer demand for mobile voice and data services.

The mobile market accounted for around 97% of telephony subscribers as of early 2021. About 96.6% of the population is covered by LTE services.

A major drawback for Paraguay’s telecom sector is that the country is landlocked, making it dependent on neighbouring countries for interconnection with submarine cable networks. This led to high prices for fixed broadband services, which in turn hampered growth in the sector and has resulted in relatively low penetration. Available technologies include DSL, cable, fibre, and WiMAX. Copaco has a near-monopoly in the DSL market, given that there is little regulatory provision for unbundled local loops and other access mechanisms. DSL is the main fixed broadband technology, but it is unavailable in much of the country. There is a fast-growing fibre broadband market, though the number of subscribers remains small, and network builds remain limited to certain pockets within the major cities.

BuddeComm notes that the outbreak of the Coronavirus continues to have a significant impact on production and supply chains globally. During the coming year, the telecoms sector to various degrees is likely to experience a downturn in mobile device production, while it may also be difficult for network operators to manage workflows when maintaining and upgrading existing infrastructure. Overall progress towards 5G may be postponed or slowed down in some countries.