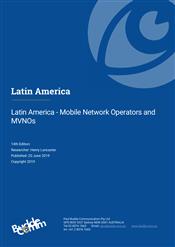 This report provides an overview of the mobile network operators and MVNOs in Latin America. It includes a range of operating and financial indicators as well as analyses on regulatory and technological developments and assessments on market competition, spectrum auctions and operator strategies.

Latin America includes markets ranging from the smaller countries such as Belize, Panama and Uruguay to the more populous ones including Brazil and Mexico, with about 208 million and 123 million people respectively. This wide range is mirrored in GDP and GDP per capita, two metrics which have had a bearing on the capacity of governments to fund investments in telecom infrastructure and in telcos to generate revenue from services.

The region hosts a small number of operators which have a presence in several countries. These include Telefónica and América Móvil, as well as Millicom International which provides services under the Tigo brand. These operators are also active in the fixed-line segment, and as such have been able to develop bundled offerings including fixed-voice and fixed broadband as well as mobile voice and broadband services. The scale of their operations has also facilitated investment in technologies including LTE-A and FttP, and they are at the forefront of 5G developments in the region. Although they are the dominant players in their respective markets, the region supports a good number of smaller operators and MVNOs.

Most countries in Latin America have poor fixed-line infrastructure, particularly outside the main urban centres, and over the years this has led to mobile infrastructure being the principal platform for voice and data connectivity. Governments and regulators alike have recognised the importance of mobile services within their telecom infrastructure plans, and as such they continue to make available spectrum to enable operators to widen the reach and capability of service offerings and in this way meet national targets for broadband penetration.

Although services based on 5G are much anticipated, most countries are likely to delay launching services until 2021 or 2022, partly due to considerations including the need for a compelling business case to warrant investment in 5G while there remains strong potential for LTE, as also the affordability and availability of 5G-compatible smartphones, and the availability of sufficient spectrum assigned for 5G. However, developments have continued: in April 2019 ANTEL in Uruguay deployed a limited 5G network while in El Salvador a 5G launch is expected before the end of 2019. Operators in Brazil, Argentina and Chile also likely to launch services in 2020. Key operators such as Telefonica, though, are relying on upgraded LTE network infrastructure for the short term, and while working on 5G from a technological standpoint the company does not intend to commercialise 5G widely until 2022.