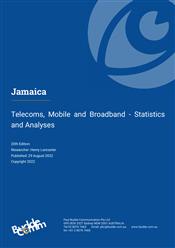 Jamaica’s telecom sector has for many years been propped up by the mobile sector, which accounts for the vast majority of internet connections and voice lines. It also accounts for just over half of telecom sector revenue. The merger between Digicel and Claro’s Jamaican business in 2012 strengthened Digicel’s position in the market, but in recent quarters Digicel Group’s financial difficulties have caused it considerable problems. The Group has considered selling off its units in the Pacific region, while it has renegotiated a number of bonds to reduce its debt to about $5.8 billion. Assets have been placed under the management of a newly created holding company.

Both Digicel and its only rival, Flow (supported by its new owner Liberty Global), have extended their LTE networks across the island, particularly during the pandemic in response to a sharp increase in data traffic.

The regulator has endeavoured to develop the MVNO sector in a bid to improve competition, though with little success. The 700MHz licensee Symbiote Investments, trading as Caricel Jamaica, had its license revoked at the end of 2018 due to breaches of the terms of the Telecommunications Act. The UK-based Privy Council in August 2020 refused Caricel’s application for permission to appeal the revocation of its telecom licences. To fill the gap in the market, a new operator, Rock Mobile, was licensed in May 2021, with obligations to provide 95% population coverage within two years.

In December 2020, the government announced the rollout of a national broadband network costing up to $237 million. The funding will be spent on improving connectivity in underserved areas, improving access to education, and deploying networks to public locations such as hospitals, municipal institutions, and police stations.

To aid in this national broadband effort, the government received a donation of 650km of fibre cabling from local cable TV providers and the two main toll road operators.

This report contains overviews, analyses and statistics of the Jamaican fixed-line, mobile and broadband markets together with information on convergence issues and on the country’s fixed line incumbent and major mobile operators.