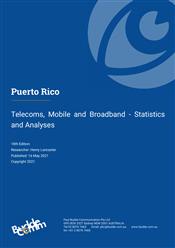 Puerto Rico has a small telecom market which in recent years has been deeply affected by a combination of economic mismanagement and natural disasters, including two hurricanes which landed in late 2017 and an earthquake which struck in January 2020. These disasters caused considerable destruction of telecom infrastructure, which in turn led to a marked decline in the number of subscribers for all services. Compounding these difficulties have been a long-term economic downturn which encouraged many people not to resume telecom services after these were restored. After some delay, the FCC in late 2019 issued an order relating to the release of funds to help rebuild telecom infrastructure.

Although Puerto Rico is a US territory it lags well behind the mainland US states in terms of fixed-line and broadband penetration. This is partly due to high unemployment rates (and consequently low disposable income) and poor telecoms investment in a market largely dominated by the incumbent Puerto Rico Telephone Company. This dominance was augmented after the company was acquired by the largest wireless operator in Latin America, América Móvil, in 2007.

The acquisition by Liberty Global of the remaining cable TV operator Choice Cable, completed in mid-2015, created a monopoly player in this sector. Liberty Cablevisión (renamed Liberty Communications of Puerto Rico in 2020), now wholly-owned by Liberty Global’s LLA division, is in a stronger position to capitalise on scale, and so provide improved services based on greater investment and on the use of technology based on the DOCSIS3.1 standard. Liberty Communications has also become better placed in the bundled service market following LLA’s acquisition of AT&T’s wireless and wireline units in Puerto Rico.

The mobile market has been impacted by several mergers and acquisitions over the last few years. In early 2017 Sprint and Open Wireless agreed to merge their networks in a bid to offer better market competition by increasing their scale and combining spectrum holdings. The T-Mobile US acquisition of Sprint Communications was approved in April 2020, and LLA’s acquisition of AT&T’s Puerto Rican and US Virgin Islands operations was finalised in October 2020.

The activities of large multinational telcos such as América Móvil, T-Mobile US, and LLA, continue to impact the Puerto Rican market. Operators have secured spectrum in the 600MHz and 3.5GHz bands, thus enabling them to expand the reach of LTE services and launch services based on 5G.

The growing number of submarine cables landing in Puerto Rico is helping to drive down the cost of telecom services, creating a demand for streaming content from abroad. The uptake of cloud-based applications for both business and individuals is also creating a heightened demand for affordable services.