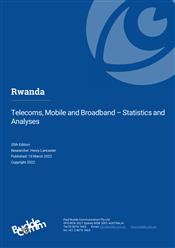 Rwanda was slow to liberalise the mobile sector, allowing MTN a monopoly until 2006 when the fixed-line incumbent, Rwandatel (since acquired by Liquid Intelligence Technologies) became the second mobile operator. There was effective competition among three operators after Tigo launched services in 2009. However, the acquisition of Tigo by Airtel saw a significant consolidation in the market, and the cancellation of Rwandatel’s licence in 2011 resulted in the market becoming a duopoly between the dominant operator MTN and Airtel.

The fixed broadband sector has suffered from limited fixed-line infrastructure and high prices. Nevertheless, operators are rolling out national backbone networks which also allow them to connect to the international submarine cables on Africa’s east coast. These cables gave the entire region greater internet bandwidth and ended the dependency on satellites. Liquid Technologies has continued to expand its FttP services across Kigali and a number of other towns, while the country also has a new cable link with Tanzania, and via Tanzania’s national broadband backbone it has gained connectivity to the networks of several other countries in the region.

The number of subscribers on LTE infrastructure has increased sharply, helped by national LTE coverage achieved in mid-2018. Mobile remains the dominant platform for voice and data services. The regulator noted that the number of mobile subscribers increased 2.7% in 2021, year-on-year. However, there was a slight fall in the beginning of 2022, though this decline was entirely from Airtel.