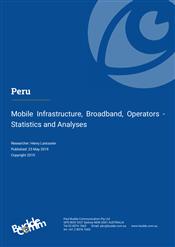 Peru’s mobile penetration is on a par with the regional average, though high penetration is attributed to the popular use (especially among urban dwellers) of multiple mobile subscriptions. This phenomenon is becoming less pronounced as network operators respond to market competition by providing generous data and voice bundles (so obviating the need for SIM cards from different networks) and as the regulator endeavours to remove illegal devices and unregistered SIM cards from the market.

Four mobile network operators compete in the mobile market: Telefónica Perú, trading as Movistar Perú, is the leading player and is followed by América Móvil’s local unit, trading as Claro Perú, and by the rebranded Entel Perú (formerly Nextel Perú) in third place. Vietnam’s Viettel, trading as Bitel, is the fourth player. Having launched services in mid-2014 the company has quickly gained subscribers and by June 2018 had a market share of 12.6%. The company has also launched LTE services, complementing its existing 3G network.

In September 2016 Virgin Mobile became the first MVNO to launch services, hosted by Movistar, and by late 2017 a small number of other MVNOs had been licensed.

Peru’s mobile market still has considerable potential to expand, especially given the country’s low fixed broadband penetration which has encouraged the take-up of mobile data services. The auction of spectrum in the 700MHz band and the release of spectrum in the 2.6GHz range has enabled the MNOs to expand the reach and capability of LTE services nationally.

This report provides an overview of Peru’s mobile market, including profiles of the key operators and their strategies, as well as market statistics and subscriber forecasts.