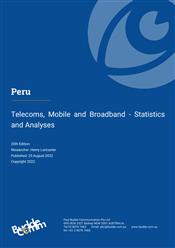 After suffering a sharp retraction in the number of subscriptions and revenue during 2020 due to the pandemic, Peru’s telecom sector managed to stage a small recovery in the first half of 2021. The extent of the decline, however, will take some time to recover from fully. It will likely be two to three years before penetration rates return to the peak levels last seen in 2018. This is especially true given the overwhelming influence of mobile on Peru’s telecommunications market, which now commands almost 95% of all connections.

Peru’s fixed-line teledensity continued its slow but relentless decline into obscurity, dropping below 7% at the end of 2021. Investment in network infrastructure, where it exists, is mainly focused on rolling out fibre cable for fixed broadband services in (mainly) urban areas. Fixed broadband penetration inched higher to reach 8.4% at the end of 2020, a positive result that reflected the shift to working from home during enforced lockdowns at the start of the year. Yet Peru has a relatively low level of computer use, and prices for fixed broadband services are among the highest in Latin America. The overwhelmingly preferred internet access platform will remain the smartphone, with a further 8.6% growth in the number of mobile broadband subscriptions expected in 2021.

One drawback to success in the mobile broadband market was the decision in January 2021 by Google’s parent company Alphabet to shut down Project Loon. This global endeavour involved the use of high-altitude balloons to provide internet access to remote, underserved areas around the world. In Peru, Loon had signed a deal with Telefónica to provide internet services in areas of the Amazon rainforest as part of the Telefónica/Facebook ‘Internet para Todos’ (IPT) project launched in 2018. However, Alphabet was unable to make the venture financially sustainable.