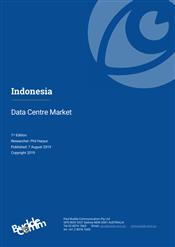 The Indonesian data centre market has experienced significant growth over the past two decades. In particular growth has been very strong over the past few years, as Indonesia seeks to bridge the gap with its more advanced neighbours such as Singapore and Malaysia.

However, lack of government incentives and programs to support the growth of data centres in the country, has seen the adoption of data centre services at a slower organic pace compared to some neighbouring countries.

Despite this, the market is now beginning to gain strong momentum. Indonesia is attracting investments from hyperscale cloud providers such as Google, Alibaba and Amazon, reflecting a growing interest in Indonesia as an alternative to Singapore, for cloud and data centre services.

Large international data centre specialists and international content and cloud providers have yet to enter Indonesia to the same extent seen in more advance markets such as Singapore and Hong Kong, however their interest in the Indonesian market is now increasing.

Compared to more mature neighbouring markets such as Singapore, Hong Kong and Japan where land for new builds is scarce and expensive to acquire, in-comparison Indonesia has better availability of land at cheaper prices. The availability of affordable land means that companies establishing a base in Indonesia could find it easier to build their own facilities.

Latency and connectivity are increasingly becoming less of an issue for second tier markets such as Indonesia.

Demand in Indonesia is beginning to be being driven the rising adoption of cloud-based services by local and international businesses as already witnessed in more mature markets such as Singapore and Hong Kong.

In turn, multimedia content providers and cloud companies are driving strong demand for data centre storage and networking in Indonesia.

Indonesia is among the Asian countries tightening requirements to store citizen and consumer data locally for the purpose of data protection.

In particular within Indonesia, the high adoption of mobile services is driving content providers to deliver their content within the country. Also, the ongoing increased use of smartphones coincides with the growth in e-commerce transactions and social media.

A key driver of recent growth in Malaysia has been strong government support to promote the country as a hub for data centres especially for data analytic applications.

These two categories still dominate the data centre market in some developing Asian markets, as these markets have yet to go through this transition.