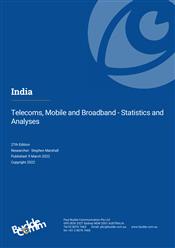 India’s telecommunications sector has struggled for growth over the last five years. The sector’s lacklustre performance has been in spite of concerted efforts by the government to bolster the underlying infrastructure in a bid to achieve universal coverage. Instead, the country’s relatively liberal regulatory environment has encouraged fierce competition and price wars amongst the operators, driving down ARPU to the point where many are now more concerned about their mere survival rather than generating positive returns for their shareholders.

State-owned as well as private operators have been forced to seek redress from the government in order to avoid bankruptcy. One particular area of contention has been the billions owed by the operators to the government in the form of Adjusted Gross Revenue (AGR) dues – usage and licensing fees charged by the Department of Telecommunications (DoT) – that have been the subject of long-standing court battles over what should be counted as revenue.

The government won that battle in the Supreme Court in 2019, but the financial impairment of that decision has pushed a number of telcos – in particular Vodafone Idea – to the brink. Add the impact of the Covid-19 crisis in 2020 and 2021 to the mix, and the government had to come to the industry’s rescue by introducing a major reform package in September 2021. Along with changes to the definition of AGR with regard to non-telecom revenue, the package includes a four-year moratorium on AGR dues and spectrum instalments.

Coincidentally, the government has also deferred the spectrum auctions for 5G until later in 2022. Mobile spectrum in India is already in short supply in terms of providing the necessary capacity to reach universal coverage, but the cash-strapped MNOs may not yet be in a sufficiently strong financial position for which to make the 5G spectrum auction viable.

This report includes the regulator's market data to September 2021, telcos' financial and operating data updates to December 2021, Telecom Maturity Index charts and analyses, assessment of the global impact of Covid-19 on the telecoms sector, and other recent market developments.