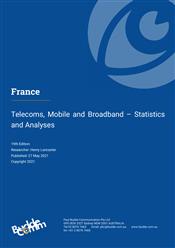 Supported by a population of more than 65 million, France’s telecom market is one of the largest in Europe. Telecom revenue, at about €30 billion annually, has declined in recent years and came under particular pressure during 2020 when a sequence of local and national lockdowns, as well as restrictions on international travel, resulted in a sharp drop in revenue from roaming and device sales. This was partly offset by growth in data traffic and the migration of subscribers to faster fixed-line broadband packages, mostly based on fibre.

The incumbent telco Orange Group is one of the world’s major players, with interests in markets across Europe, the Middle East and Africa. The company has embarked on a new multi-year Engage 2025 plan which is focussed on growth in the developing markets, and on the greater use of artificial intelligence and data. Despite market liberalisation, Orange still dominates all sectors, though increasing competition from a number of major players has gradually eroded this lead.

The mobile phone market, worth about €13 billion annually, is dominated by Orange, SFR Group (owned by Altice Group), Bouygues Telecom, and Free Mobile (Iliad). There are many MVNOs in the market, though their share of subscribers fell at the end of 2020 when one of the largest of them was acquired by its host network operator. LTE networks provide near universal coverage, and carry about 95% of mobile data traffic. Operators have launched 5G services, and these have been supported by the late-2020 auction of spectrum in the 3.5GHz range.

France’s fixed broadband market is increasingly focussed on fibre, which accounted for 71% of all fixed lines at the beginning of 2021. Growth in the fibre sector has been stimulated by households securing faster data packages during the pandemic. The number of DSL lines has fallen sharply as customers migrate to fibre infrastructure.