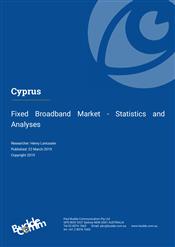 The broadband market in Cyprus continues to develop steadily, providing the country with one of the highest broadband penetration rates in the region. DSL remains the dominant access platform, with cable broadband restricted to a single operator, Cablenet. Although Cablenet’s network was for long concentrated in a few key towns, under the management of its majority-owner GO the company has invested in both its fixed-line and mobile networks and its cable infrastructure now covers about 53% of premises. Fibre infrastructure in Cyprus is still in its infancy, though Cyta since mid-2018 has embarked on a significant ten-year NGN investment program which includes extending an FttP service to about 200,000 premises.

This report provides an overview of Cyprus’s broadband and digital media markets, detailing industry developments and providing key statistics on areas including cable and DSL broadband, fibre networks and IP-delivered services such as videostreaming. Information contained in this report mainly relates to the Greek Cypriot area.