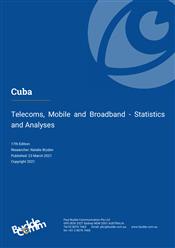 Cuba’s telecom sector remains a peculiarity, with state control having stymied rather than promoted the development of all sectors. The country has the lowest mobile phone and internet penetration rates in the region, while fixed-line teledensity is also very low. Fixed-line and mobile services remain a monopoly of the government-controlled Empresa de Telecomunicaciones de Cuba (ETESCA Cubacel).

Although there are still state restrictions over the right to own and use certain communications services, a thawing of relations between the US and Cuba has encouraged the government to improve access to services. Since 2015 Wi-Fi hotspots have been put in a number of places and since 2019, Cuba's Ministry of Communications (Mincom) has allowed individuals to create small private not-for-profit Wi-Fi networks and to import cokecommunications equipment.

Access to sites is also tightly controlled and censored. A DSL service was launched in March 2017 in areas of Havana and has since been expanded though costs have been set too high for most Cubans able to access the service. However, in 2019 Google and ETECSA signed an agreement to improve access for Cuba’s internet users by setting up a cost-free and direct connection between their respective networks.

Similarly, LTE services have been launched, with over 473 LTE base stations having been built across the island by the end of 2019. The mobile user base has grown to over six million, 70% of which are smartphone users.