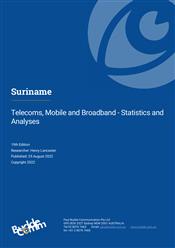 Suriname is the smallest nation on the South American continent, with about 580,000 inhabitants. The only Dutch-speaking nation in South America, it has close affinities with the Caribbean, and is a member of the Caribbean Community and Common Market (CARICOM).

The state-owned incumbent telco, Telesur, is the only provider of fixed-line and fixed broadband services in Suriname. The country’s fixed-line infrastructure is reasonably reliable in the more populated coastal region, though poor in the interior. Telesur started building out a fibre network in Paramaribo 2013, and in June 2018, the company started with the rollout of the National Broadband Project (TNBP), which was completed in 2019.

Fixed teledensity and broadband penetration are slightly lower than average for Latin America and the Caribbean, while mobile penetration is significantly above the regional average and much higher than would be expected given the country’s relatively low GDP per capita.

Many Surinamese have up to three mobile lines with different providers, which has pushed up penetration figures although the number of subscribers has fallen in recent years as consumers have responded to economic pressures. The mobile market supports only two players: Telesur (trading as TeleG), and Digicel (part of Digicel Group, a significant operator across the Caribbean). In early 2015 Digicel acquired the only other operator, Uniqa, which only had about 5,000 subscribers. In January 2017 Digicel signed a deal to host the MVNO Transatel, which operates in a number of markets across the Caribbean and Latin America. Through a refinancing measure, Digicel in May 2020 reduced its debts by more than 20%.