Chorus is responsible for the modernisation of telecoms infrastructure in New Zealand, and is the key provider for the country’s ambitious Ultra-fast Broadband initiative. Following the operational separation of Telecom New Zealand (now Spark) into three entities in 2008, Chorus became the business unit responsible for operating the Telecom NZ network and infrastructure. One of its roles was to sell network access to the Telecom retail division as also to market competitors. Since late 2011, with the operational separation of Telecom completed, Chorus has operated as a separately listed company on the NZSX and the ASX.

Pricing models for wholesale services have been amended on several occasions since 2012. The latest pricing model saw an increase in access pricing, which favoured Chorus’s revenue stream but which also encouraged the main providers Spark and Vodafone to increase retail pricing for broadband customers from March 2016.

This report provides an overview of Chorus, including company analyses s well as operational data to December 2015 and financial statistics for H12016. 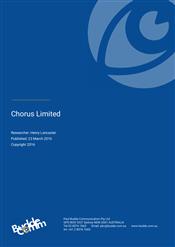