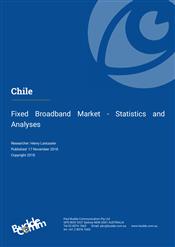 Chile’s broadband penetration is relatively high for the region. The country experienced a slump in economic growth from 2014 to 2017 though it maintained one of the highest GDP per capita rates in the region. The population is also receptive to new technologies, so encouraging operators to develop services based on LTE and fibre-based broadband infrastructure. Broadband services in Chile are among the fastest and least expensive in Latin America: in terms of both broadband penetration and broadband speed, Chile ranks second in South and Central America after Uruguay.

A number of operators compete in the broadband sector. VTR, part of Liberty Global’s LILA unit, overtook Movistar as the market leader during 2018. The two other prominent players include Claro and GTD, while Entel is a distant challenger

This report provides an overview of Chile’s broadband market, including profiles of the main players, market statistics, analyses, and forecasts.