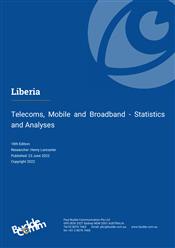 Liberia has a telecom market which is mainly based on mobile networks. That this should be so is largely due to the protracted civil war which destroyed much of the fixed-line infrastructure. The fixed-line incumbent telco– rebranded as LTC Mobile in January 2022–has struggled with mismanagement and government neglect. Its revenue is inadequate to allow it to invest in network infrastructure, and it has failed to make inroads in the market.

In an attempt to rectify this dire situation, the government in late 2020 awarded LTC Mobile a GSM licence, thereby hoping that the company could branch into mobile voice and data services and thus generate revenue. However, the process is a gamble since it will compete with the two established operators MTN Liberia and Orange Liberia, both of which have considerably greater resources and experience. To facilitate LTC Mobile’s market entry, the government in January 2022 set in train amendments to telecom legislation though it is uncertain what results these may have in the long term. LTC Mobile soon afterwards launched LTE services.

Internet services are available from a number of wireless ISPs as well as the mobile operators. The high cost and limited bandwidth of connections means that internet access is expensive and penetration rates are very low. Although additional bandwidth is available from an international submarine cable, considerable investment is still needed in domestic fixed-line infrastructure before end-users can make full use of the cable.

The harmonisation of a disorderly mobile licensing and spectrum allocation regime has caused some difficulties, and market penetration remains low compared to other countries in the region. Penetration has also been affected by SIM card registration requirements imposed in recent years.

The market is ineffectively monitored by the telecom regulator, which lacks the resources, technical expertise, and documentation to enforce its orders. As a result, a number of operators are able to avoid paying fees to the government and have continued to operate despite the regulator’s rulings that they must close down their services.