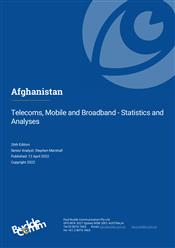 The return of the Taliban to power in August 2021 following the American-led withdrawal of security forces has thrown the telecom sector – along with the rest of the country’s developing economy – into disarray.

Afghanistan was already sitting near the bottom of the world’s rankings in terms of its telecom market maturity, but it had at least been making some positive progress toward establishing widespread coverage over the prior decade under civilian administration. However, if past experience of Taliban rule is anything to go by, all of that development is now at risk of being undone and the country’s fortunes going in reverse.

After the first Taliban regime was toppled in 2001, considerable foreign investment along with open competition in the telecom sector resulted in the transformation of the mobile market, in particular. The first mobile network was set up in 2002, and by 2020 coverage had reached 90%. Mobile penetration rates, too, had climbed from zero to almost 100% by the time a new insurgency kicked off in 2019 that was closely followed by the start of the Covid-19 pandemic. Both events caused a falloff in subscriber numbers as well as a drop in revenue for the mobile operators, but it was additional costs involved with repairing and replacing network infrastructure destroyed by the Taliban in the leadup to their takeover that put the greatest strain on the operators’ finances. With increased levels of risk and uncertainty now associated with running a telecom company in the embattled state, MTN Afghanistan has become the first operator to announce that it is in talks with prospective buyers to allow it to exit the market as quickly as possible.

This report update includes the regulator’s market data and operator data to June 2021, Telecom Maturity Index charts and analyses, assessment of the global impact of Covid-19 on the telecoms sector, and other recent market developments.