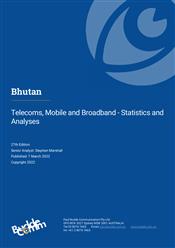 The telecom market in Bhutan is dominated by the mobile sector, which accounts for the vast majority of voice and data connections. This is partly the result of poor fixed-line infrastructure, and topographic issues which has rendered it easier to deliver services based on mobile infrastructure.

The fixed broadband sector is similarly limited. The number of subscriptions fell in the first half of 2020, and development in the sector is expected to be stagnant over the next five years.

While investment is focussed on mobile infrastructure, Bhutan Telecom in late 2019 deployed an emergency telecom network, designed to be usable in the event of natural disasters.

The two mobile network operators have extended the reach of LTE, and by mid-2020 about 60% of all mobile internet users were on this platform. In early 2020 the regulator published its framework for the deployment of 5G, cautiously noting that it preferred to learn from the experiences in other markets before committing to a launch, and thus 5G is not expected to be widely available in Bhutan until at least 2024.