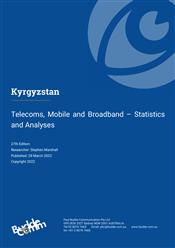 The Kyrgyz Republic (more commonly known as Kyrgyzstan) has enjoyed relatively strong economic growth over the last decade – at least in terms of other Commonwealth of Independent States (CIS) countries in Eastern Europe and Asia that formed following the dissolution of the Soviet Union in 1991.

The country’s telecom sector (specifically the mobile segment) has likewise been able to prosper. However, ongoing political tension, increasing repression of the media and information, and continuing problems with corporate governance may be putting a strain on further growth by reducing the country’s appeal to much-needed foreign investors.

Kyrgyzstan has been reasonably successful in its attempts to liberalise its economy and open up its telecom market to competition. The privatisation of state-owned entities – particularly the fixed-line incumbent provider Kyrgyztelecom and the mobile operator Alfa Telecom – has been less well received, with government ownership continuing despite repeated attempts to offload its stakes in those companies. They simply haven’t been able to generate enough interest from the private sector.

Still, the Kyrgyzstan mobile market has achieved high levels of penetration (140% in 2021) along with a fairly competitive operating environment with four major players. Mobile broadband, too, has come along strongly, reaching over 125% penetration in 2019 before falling back slightly during the Covid-19 crisis. Slow-to-moderate growth is expected for both segments in coming years, supported by the anticipated rollout of 5G services starting from late-2022.

This report includes the regulator's market data reports and telcos' financial and operating data updates to December 2020, Telecom Maturity Index charts and analyses, assessment of the global impact of Covid-19 on the telecoms sector, and other recent market developments.