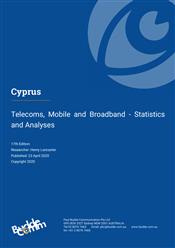 This report provides a comprehensive overview of trends and developments in Cyprus’s telecommunications market. The report analyses the fixed-line, mobile and broadband sectors. Subjects include:

Despite the liberalisation of Cyprus’s telecom sector, the market overall continues to be dominated by the incumbent, Cyta, which is still fully-owned by the state though the government continues to press for a sale of a minority stake in a bid to arrest the continuing decline in the operator’s market share. As such, these plans (which form part of the 2019 budget) have rekindled schemes to privatise Cyta dating to 2013 as part of a wider financial bailout package.

Improved regulatory conditions, particularly in relation to network interconnection and access, has given competing operators the confidence to invest in network infrastructure, to make use of unbundled local loops and to launch competing services.

The broadband market continues to develop steadily, providing the country with one of the highest broadband penetration rates in the region. DSL remains the dominant access platform, with cable broadband restricted to a single operator, Cablenet. Although Cablenet’s network was for long concentrated in a few key towns, under the management of its majority-owner GO the company has invested in both its fixed-line and mobile networks, and its cable infrastructure now covers about 53% of premises. Fibre infrastructure in Cyprus is still in its infancy, though Cyta since mid-2018 has embarked on a significant ten-year NGN investment program which includes extending an FttP service to about 200,000 premises.

The Cypriot mobile market is served by four mobile network operators. Cyta has offered mobile services under the Cytamobile-Vodafone brand since 2004 following a partner agreement with Vodafone Group, while MTN Cyprus was once part of the international MTN Group before being acquired by Monaco Telecom in mid-2018. PrimeTel added market competition after launching services in 2015 soon after the company secured mobile spectrum licences (it had offered services as an MVNO since 2011). The cableco Cablenet, which also offered mobile services as an MVNO, launched services over its own network in mid-2017.