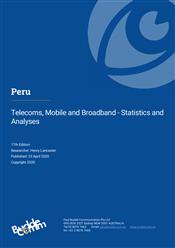 This report provides a comprehensive overview of trends and developments in Peru’s telecommunications market. The report analyses the fixed-line, mobile and broadband sectors. Subjects include:

The government is addressing these shortcomings via ambitious investment plans to deploy telecom infrastructure and services in underserved areas. Most of the work was complete by the end of 2017, when eight regional fibre-based networks were connected to the National Fibre-Optic Backbone. However, there remain delays in connecting supplementary infrastructure to the network, while competition from private networks prompted the Ministry of Communications in late 2018 to re-evaluate the economic modelling of the project.

Broadband penetration in Peru is considerably lower than the Latin American average, despite government efforts to encourage the development of the sector.

Mobile penetration is on a par with the regional average, though high penetration is attributed to the popular use (especially among urban dwellers) of multiple mobile subscriptions. This phenomenon is becoming less pronounced as network operators respond to market competition by providing generous data and voice bundles (so obviating the need for SIM cards from different networks) and as the regulator endeavours to remove illegal devices and unregistered SIM cards from the market.

Telefónica Perú (trading as Movistar Perú) is the leading player in the mobile market, followed by Claro Perú, Entel Perú and Viettel (trading as Bitel). The market still has considerable potential to expand, especially given the country’s low fixed broadband penetration which has encouraged the take-up of mobile data services. The auction of spectrum in the 700MHz band and the release of spectrum in the 2.6GHz range has enabled the MNOs to expand the reach and capability of LTE services nationally.

This report provides an overview of Peru’s telecom infrastructure, together with profiles of the major fixed-line operators and a wide range of relevant statistics and analyses. The report also reviews the mobile market, including data on the key operators and their strategies in a highly competitive environment in addition the report covers the fixed and fixed-wireless broadband segments, including subscriber forecasts.