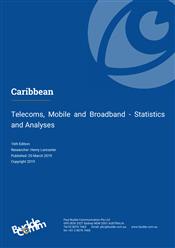 Given the relative lack of economic diversity within the Caribbean, the telecoms sector accounts for a higher proportion of GDP in most markets in the region than is common elsewhere. The sector remains one of steady growth, particularly in the mobile telephony and data segments. Although there are a number of smaller players operating, Digicel Group and Liberty Latin America are the dominant providers, with local business units spanning the region. Their fixed-line and mobile infrastructure assets have cemented their position as full-service providers. Competition between them has encouraged investments to expand the reach of fibre networks and LTE, while there is also some interest in 5G infrastructure from Liberty’s mobile unit Flow.

There have been ongoing changes in telecoms regulations across the region, with national regulators focussed on efforts to improve competition and facilitate investment.

The region’s economy is diverse, and often adversely affected by poor weather: some countries (notably Puerto Rico) are still recovering from the effects of hurricanes which swept through in late 2017. The varied economies range from Cuba and Haiti to those states which are focussed on high-end tourism and the financial services sector. Other than tourism, countries in the region have some small-scale primary industries, to a greater or lesser degree based on fisheries, bauxite and other minerals, and timber.

Cuba’s telecom sector remains a peculiarity, with state control having stymied rather than promoted the development of all sectors. The country has the lowest mobile phone and internet penetration rates in the region, while fixed-line teledensity is also very low. Fixed-line and mobile services remain a monopoly of the government-controlled Empresa de Telecomunicaciones de Cuba (ETESCA Cubacel). Nevertheless, reform of the sector, though glacial, is evident in launch of 3G and DSL services and in the growth in the number of Wi-Fi hotspots. 3G is only available to about two-thirds of the population, costs are high, and locals accept that the technology is dated.

Jamaica’s telecom sector is largely propped up by the mobile sector, which accounts for most internet connections as well as a dominant share of sector revenue. Both Digicel Jamaica and Flow provide about 90% population coverage with LTE. Digicel has also launched its MyCash m-money service.

Puerto Rico’s telecom market has been hard hit in recent years by a combination of economic mismanagement and the devastation caused by hurricanes, which led to a marked decline in the number of subscribers for all services. Although Puerto Rico is a US territory it lags well behind the mainland US states in terms of fixed-line and broadband penetration. This is partly due to high unemployment rates (and consequently low disposable income) and poor telecoms investment in a market largely dominated by the incumbent Puerto Rico Telephone Company. The activities of the US-based telcos, including T-Mobile US, Sprint and AT&T continue to impact on the Puerto Rican market. This has recently been seen in these operators securing spectrum in the 600MHz and expanding the reach of LTE services.