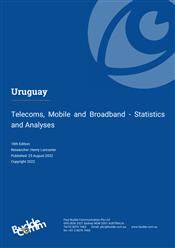 Uruguay has an advanced telecom market, with excellent infrastructure and one of the highest broadband penetration rates in Latin America. Fixed-line teledensity is also particularly high for the region, while mobile penetration is the second highest after Panama. In terms of computer penetration, Uruguay tops all other countries in the region by a considerable margin, and this has facilitated growth in fixed-line broadband adoption.

The government and telecom regulator have introduced a range of measures to help develop the deployment of fibre infrastructure, partly in a bid to encourage economic growth and stimulate e-commerce. Fibre accounted for about 77% of all fixed and fixed-wireless broadband connections as of June 2020. With investment projected to reach $800 million, the state-owned incumbent Antel is expected to provide national FttP coverage by early 2022. Together with the FttP network, the opening of the submarine cable system (Bicentenario) in early 2012 and the Tannat cable in August 2017 have helped boost Uruguay’s internet bandwidth, and increase the data rate available to end-users.

Uruguay is one of the very few Latin American countries where the local fixed-line market is neither privatised nor liberalised. Antel has a monopoly in the provision of local telephony and fixed broadband services. Other segments of the telecom market have been opened to competition, including international long-distance telephony, mobile telephony, and fixed-wireless broadband.

Uruguay is also one of the few countries in the world where broadband access via cable modem does not exist. Although cable networks are well equipped technologically, and digital cable TV is widely available, telecom legislation prohibits data transmission over pay TV networks. However, the government announced in December 2020 that it intended to introduce changes to the law to permit pay TV providers to offer internet and telephony packages over their own networks.

The mobile market is dominated by Antel, with Telefónica’s Movistar in second place and América Móvil’s Claro third. All three operators offer mobile broadband through 3G and LTE networks. Operators have achieved nationwide 3G coverage and the number of mobile broadband subscribers continues to grow. Antel has been at the forefront with LTE services, though the auction of multi-band spectrum in August 2017 has also enabled Movistar and Claro to widen the reach of their LTE offers.

In April 2019 Antel launched a commercial 5G network, though limited in reach. At the end of 2019, spectrum in the 5G-suitable range was auctioned, enabling operators to launch 5G services. The regulator is working on a spectrum and connectivity policy that emphasises 5G.