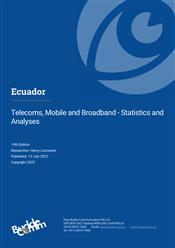 In common with several other mid-sized countries in the region, Ecuador has a small telecom market dominated by the mobile sector. The evolution of the market has been influenced by the poor fixed-line infrastructure, which has stymied the development of fixed-line broadband services. To some extent poor infrastructure has been the result of topographical challenges which have rendered the cost of deploying networks to remote and mountainous areas prohibitive.

Although Ecuador has seven fixed-line operators and a large number of ISPs, the state-owned incumbent CNT leads the fixed-line market, and thus also the fixed broadband market.

The mobile sector is shared by América Móvil’s Conecel (trading as Claro), which has a 54.8% share of the market by subscribers, Telefónica’s Otecel (trading as Movistar) with about 30.7% of the market, and CNT (previously Telecsa/Alegro) with a share of 14.5%. Thus far the MVNO sector has been slow to develop, partly because the incumbent operators also have their low-cost brands and thus there is little business case for new market entrants.

The government is keen to advance universalisation and improve teledensity, and it is expected that CNT will continue its efforts to expand the country’s fixed-line infrastructure. At the same time, a national broadband plan has been implemented to expand and improve internet access for all Ecuadoreans. The fixed broadband market – including DSL, cable modem and fibre-based services – should continue to grow strongly in coming years, with an anticipated focus on fibre as networks are built out from the more densely populated urban areas. The mobile broadband market is also expected to grow strongly as network operators expand the reach of their LTE services.