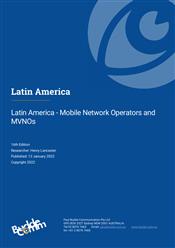 Latin America covers a diverse array of markets, ranging from smaller countries such as Belize, Panama, and Uruguay to much more populous ones like Brazil and Mexico. While this wide range in size is also mirrored in each country’s GDP – a metric that has had a bearing on the capacity of governments to fund investments in telecom infrastructure and in telcos to generate revenue from services – the fortunes of the Latin American telecommunications market have been inextricably linked to the Covid-19 pandemic since 2020.

Unlike most other industries that had to suffer through long periods of lockdowns that reduced or stopped productivity, the telecom sector experienced moderate to strong levels of growth in most Latin American markets. That was mainly due to the increased need for people who were working or learning from home to have access to quality communications services, especially mobile and broadband. This phenomenon outweighed the considerable negative economic impacts of the Covid-19 crisis such as job losses and business closures, leading many to scale back their discretionary spending or to cut services altogether.

The mobile sector in Latin America is dominated by three major regional operators: Telefónica (which provides services under the Movistar brand), América Móvil (Claro), and Millicom International (Tigo). All three companies grew their overall Latin America business in 2020 and 2021 (at least as far as 2021’s third quarter results indicate) in terms of subscriber numbers, service revenues, and profitability.

The region also supports a good number of smaller operators and MVNOs, most of which enjoyed strong results during the period. Only a small number of countries reported a drop in the number of mobile subscriptions in 2020, but most had more than bounced back by September 2021.

Another downside of the Covid-19 crisis has been a decision by many Latin American countries to further delay the release of spectrum for commercial 5G services. Brazil did not hold its long-delayed multi-spectrum auction until November 2021. Other suggested causes are a perceived lack of demand among consumers, and a surfeit of capacity on the existing LTE networks. Yet many 5G trials have been completed, and MNOs around the region have been using the last eighteen months to invest their earnings into upgrading their infrastructure in order to be fully prepared for launch once the right time finally arrives.

Other recent developments in the Latin America mobile market involved further consolidation of MNOs. Examples included: a consortium comprising Telefônica (Vivo), TIM Brasil, and América Móvil (Claro) acquiring Oi’s mobile business in Brasil, Colombia’s Novator Partners acquiring a majority stake in Avantel, Liberty Latin America agreeing to acquire 100% of Movistar Costa Rica’s operations, as also AT&T’s mobile business units in Puerto Rico and the US Virgin Islands. That aside, the level of M&A activity has been on a much smaller scale than was seen in 2019, when Telefónica Group decided to sell off its remaining Latin American operations (having already divested most of its businesses in Central America, and retaining its Brazil business,), and to focus on its European operations. Little progress has been made since, however. This may either have been due to their inability to find a prospective buyer during these times of uncertainty and volatility (and which would not face insurmountable regulatory hurdles), or the fact that the reorganised business unit actually produced reasonably good results during the period and thereby reduced the pressure on what had become an underperforming part of Telefónica’s global business.

This regional report provides an overview of the mobile network operators and MVNOs in Latin America. It includes a range of operating and financial indicators to September 2021, as well as analyses on regulatory and technological developments and assessments on market competition, spectrum auctions, and operator strategies.