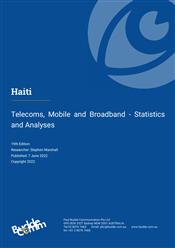 Haiti’s economic and social indicators remain far lower than the average for Latin America and the Caribbean. The recent years of political and economic turmoil and natural disasters, including periodic and damaging hurricanes, have stifled most sectors of the economy, including the telecoms sector which remains one of the least developed in the world.

In the internet market, poor fixed-line infrastructure has obliged most businesses to rely on satellite and wireless technologies. However, the launch of services by Natcom, a joint venture supported by Viettel Group, in late 2011 has provided a significant boost to the sector. The company in subsequent years has built three international gateways and quadrupled international connectivity. As a result, broadband services are much more readily available, and Natcom has become a wholesale provider for the small number of other ISPs in the market.

Nevertheless, there remain significant barriers to fixed-line broadband development, not least of which is the low income level among most of the population, low PC penetration, and the perennial problem of equipment theft. Although Natcom has built a 6,500km fibre backbone, which is helping to support growth in the fixed-line broadband sector, practical challenges mean that for the majority of people and businesses connectivity is achieved through mobile networks.

The mobile sector accounts for the vast majority of voice lines and data services. Natcom provided a competitive boost to the sector in 2011, though this was set back to some degree by the Digicel Group’s acquisition of the number two player Voilà, and the integration of the latter’s mobile network in late 2012. With the collapse of the third operator HaiTel in mid-2013, this left Digicel with about three-quarters of the market. The telecom regulator has supported Natcom by providing it with an LTE licence at a cost far lower than that demanded from Digicel. In 2020 both operators were given a one year period of exclusivity in the provision of LTE services, though both had asked for four years. Their efforts in promoting LTE as well as innovative mobile data services such as mobile banking are going some way to improving internet connectivity in rural areas, and in coming years this will enable communities to make greater use of internet services in those many areas where fixed-line infrastructure remains inadequate.