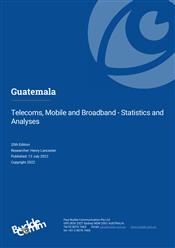 Guatemala’s telecom infrastructure is relatively poor for the region, the result of underinvestment. However, there has been some stimulus recently from the US, which has earmarked up to $1.9 billion for local projects aimed at improving telecom connectivity and services across Central America. It is hoped that these upgrades would dissuade migration to the US by enabling locals to take advantage of ICT services locally.

In addition, the government and telecom regulator have stepped up their investment efforts, which has resulted in a steady growth in the number of fixed lines. In turn, this has stimulated the take-up of fixed broadband. The local telco Tigo Guatemala in late 2021 became wholly-owned by Millicom, and the unit now accounts for the largest proportion of MIC’s revenue.

Two new submarine cables are due for completion later in 2022. Improved international connectivity should drive further uptake of both fixed and mobile broadband services.

Key players including Tigo Guatemala and América Móvil are regional powerhouses which can tap into expertise and financial resources to bolster their Guatemalan businesses. The acquisition of Telefónica’s Guatemala business by América Móvil in 2019 created a strong competitor to Millicom, which dominates the mobile sector. Intense competition among the operators has helped to improve services and lower prices for end-users.