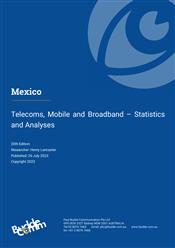 With a population approaching 125 million and with relatively low broadband and mobile penetration, Mexico’s telecom sector retains significant potential for growth. The market is still dominated by the incumbent Telmex and by Grupo Televisa, which together retain about two thirds of subscribers overall. A sector regulator set up in 2013 has enforced measures aimed at removing barriers to foreign investment and at reducing the market share of these dominant operators. The reforms are helping to make Mexico’s telecom market more competitive.

The Senate’s multi-party coordination body in 2020 proposed a merger between three agencies – COFECE, the IFT and the CRE – into a single agency, which would require an amendment to articles 27 and 28 of the Constitution. Such a merger could make the market less competitive, and discourage foreign investment.

In the fixed broadband sector significant changes are underway, with the main cable TV providers Megacable and Grupo Televisa widening their bundled services offerings, and with some important market consolidation. The fibre sector has shown particularly strong growth during the last two years as the key operators expand their network reach beyond the core densely urban areas.

The mobile market also continues to undergo considerable changes in the wake of regulatory efforts to curb the market dominance of Telcel. Although the MVNO segment has only a very small market share, it continues to attract investment, and new players enter the market each year. A wholesale mobile network operating in the 700MHz band was set up in 2018 and is expected to reach the vast majority of the population by 2025. However, the company charged with managing the network secured bankruptcy protection in late 2021, giving it some breathing space to address its financial difficulties.

Developments in 5G have been slow given the existing capacity of LTE, though the auction of spectrum in the 600MHz band (among the first globally) later in 2021 will stimulate the sector as operators launch services.