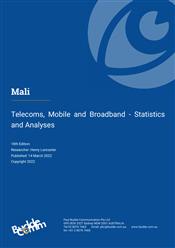 Mali’s topography includes large tracks of sparsely populated desert, with many settlements being hard to reach and thus rendering it difficult and expensive to provide effective fixed or mobile networks. Security issues have also been a concern, leading to delays in building the national backbone network. Following a coup in 2012 large areas in the north of the country were taken over by Islamic militants. The coup of September 2020 unsettled politics, and was soon followed by a second coup. The coup leaders put off holding the promised elections, and this in turn contributed to the February 2022 decision by France and other European governments to end their military support against the militants. Many areas of the country have remained generally ungovernable.

Compounding these difficulties is the fact that underinvestment in fixed-line networks has meant that telecom infrastructure is barely adequate to serve consumer needs in most towns and is largely absent in most areas of the country. In addition, a combination of poverty, high illiteracy, and low PC use has led to a very low take-up of fixed-line internet services. In common with many other countries in the region, Mali has taken to mobile networks for voice and data services. Mobile networks account for about 98% of all telecom connections. Despite these challenges, there has been progress in fixed-line connectivity, particularly during 2020 and 2021.

Orange Mali entered the market as the second mobile and fixed-line operator in 2003, and soon became the dominant provider. The duopoly with the national telco, Sotelma, continued until late 2017 when Alpha Telecom (after much delay) launched mobile services. A fourth mobile licence was secured by Mobilis, owned by Algérie Télécom, at the end of 2019.

Mali’s landlocked location makes it dependent on neighbouring countries for international bandwidth, which has kept internet prices high. Improvements in this sector can be expected from the recent arrival of several new international submarine cables in the region, while Orange Group has also been engaged in building a terrestrial network linking the capital cities of eight countries in the region, including Bamako.