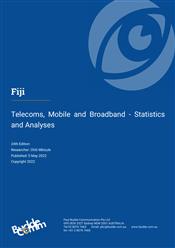 Fiji is the leading market to watch in terms of both LTE and 5G development in the region. The market boasts relatively sophisticated, advanced digital infrastructure, with telcos’ heavy investment resulting in the country having the highest mobile and internet penetration in the Pacific Islands region.

LTE, LTE-A, and fibre technologies have received the most investment by the Fijian mobile operators, which include Digicel Fiji, Vodafone Fiji, and Telecom Fiji. Notably, LTE now accounts for the largest share of connections in the mobile segment. Concentrating on the more highly populated areas, the operators are preparing for the next growth area of high-speed data. They also have 5G in mind, and are preparing their networks to be 5G-ready, anticipating an easier migration to the technology based on the relatively high LTE penetration rate. The sale of Digicel to Telstra also passed a major hurdle when the Fijian Competition and Consumer Commission approved the transaction in March 2022.

Fiji presents a challenging geographic environment for infrastructure development due to its population being spread across more than 100 islands. However, the majority of Fijians live on the two main islands of Viti Levu and Vanua Levu.

In July 2018, the two islands were linked by the Savusavu submarine cable system, which provides a more secure link in times of emergency weather events such as the regular tropical cyclones that often cause massive destruction to the area, including destroying essential infrastructure such as electricity and telecommunications equipment. Notably, the December 2021 eruption of the Hunga Tonga–Hunga Ha'apai submarine volcano in Tonga damaged the Tonga Cable which connects Fiji, and Tonga blocking the latter off from internet services. Cable theft and damage of critical communications infrastructure has also become a concern in Fiji, prompting authorities to establish a joint taskforce to tackle the issue.

In Fiji, the Covid-19 pandemic has devastated the economy that is otherwise reliant on the hospitality and tourism sectors. The country faced strict lockdowns and restrictions on cross-border travel due to the onset of the Delta variant in April 2021. Although the economy is in recovery, these sectors still face an even more challenging business environment.

On the consumer side, spending on telecoms services and devices is under pressure from the financial effect of large-scale job losses and the consequent restriction on disposable incomes. However, the crucial nature of telecom services, both for general communication as well as a tool for home-working, has offset such pressures. The market is thus expected to continue a positive growth trajectory through 2022.