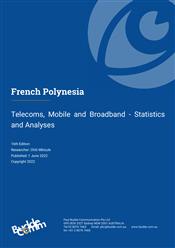 French Polynesia has one of the most advanced telecoms infrastructures in the Pacific Islands region. The first submarine cable was deployed in 2010 and additional cables have been connected to the islands in subsequent years, vastly improving French Polynesia’s international connectivity. An additional domestic submarine cable will connect remote islands by the end of 2022.

French Polynesia is also a hub for satellite communications in the region, based on it hosting one of the uplink systems of the Galileo satellite network.

With improved international connectivity, fixed broadband penetration has become amongst the highest in the region. A considerable number of consumers access FttP-based services. With the first data centre in French Polynesia on the cards, the quality and price of broadband services is expected to improve as content will be able to be cached locally, reducing costs for consumers.

About 43% of the country’s mobile connections are on 3G networks, while LTE accounts for 12%. By 2025, LTE is expected to account for more than half of all connections. It is also estimated that 77% of mobile subscribers will have smart phones by 2025.