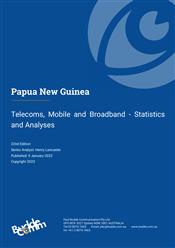 Fixed-line teledensity in Papua New Guinea has seen little change over the past two decades. Progress in the country’s telecom sector has come primarily from mobile networks, where accessibility has expanded considerably in recent years, with population coverage increasing from less than 3% in 2006 to more than 90% by early 2021. Digitec Communications ,operating under the Vodafone PNG banner, launched services in April 2022, becoming the country’s third mobile network operator (MNO), and joining Digicel and Bmobile.

The three MNOs operate networks offering services based on GSM, 3G, and LTE, depending on location. GSM is prevalent in many rural and remote areas, while 3G and LTE are centred more on urban areas. MNOs’ investments in 4G are growing, though GSM still represents the bulk of all mobile connections owing to the low penetration of smartphones and the concentration of high-speed data networks predominantly in high value urban areas.

A lack of sufficient competition and investment in the wireline segment has driven up prices and hampered network coverage and quality. Infrastructure deployment costs are high, partly due to the relatively low subscriber base, the difficult terrain, and the high proportion of the population living in rural areas. As a result, fixed telecom infrastructure is almost non-existent outside urban centres, leaving most of the population un-served. PNG is the Pacific region’s largest poorly developed telecom market, with only around 22% of its people connected to the internet. This falls far behind the recommended targets set in the country’s National Broadband Policy drafted in 2013, which aimed to provide broadband access to 90% of the total population by 2018.

The existing submarine cable infrastructure is insufficient to serve the country’s needs. Low international capacity has meant that internet services are expensive and slow. Internet access has improved, however, with the Coral Sea Cable System which came online in 2019. The cable links PNG to the Solomon Islands and Australia (landing at Sydney). Despite the improvement in recent years, the country is still impacted by a connectivity infrastructure deficit, making it reliant on more expensive alternatives such as satellites, also weighing on the affordability of services for end-users.

After Chinese investors expressed their interest in acquiring the financially troubled Digicel Pacific, the Australian government decided to back Telstra’s purchase of the operator, in a bid to limit Chinese expansion and influence in the region. The transaction will include Digicel’s units in Fiji, Nauru, PNG (its largest market), Samoa, Tonga, and Vanuatu. As part of its efforts to promote itself in the region, and to counter the growing influence of China’s telcos, the Australian government provided the bulk of the funds to complete the deal.

In June 2021, the National Executive Council voted to abolish Kumul Telikom Holdings, and in September 2021 the government announced its decision to merge the state-owned telcos Bmobile and Telikom, creating a more efficient vertically integrated operator.