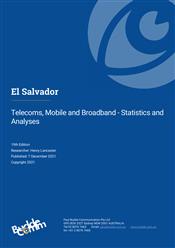 Although El Salvador is the smallest country in central America geographically, it has the fourth largest economy in the region. Economic potential is limited by the relatively small population, while the country’s telecom sector has been restricted by poor infrastructure and unequal income distribution. There have been organisational delays which have retarded the development of telecom services, though during the last few years much progress has been evident, and indeed the telecom sector has been one of the more successful within the overall economy.

El Salvador’s fixed-line teledensity is substantially lower than the Latin American and Caribbean average. There has been a significant drop in the number of fixed lines since 2010, particularly in 2017, largely due to the substitution for mobile-only alternatives. About 94% of all telephony lines in the country are on mobile networks.

Mobile penetration is remarkably high considering El Salvador’s economic indicators, being about a third higher than average for Latin America and the Caribbean. The country was one of the last in the region to provide LTE services, mainly due to the inadequate provision of suitable spectrum. The multi-spectrum auction conducted at the end of 2019 has allowed MNOs to improve the reach and quality of their service offerings.

El Salvador’s telecom legislation is one of the more liberal in Latin America, encouraging competition in most areas and permitting foreign investment. However, there are no regulations which promote wholesale broadband, and thus in the DSL market leader Claro retains a virtual monopoly. The only effective cross-platform competition in the broadband market comes from the few cable operators.

There has been some market consolidation in recent years, including Telemóvil’s acquisition of the regional cable TV provider Caribena Cable. In May 2019, the competition authority began assessing the sale of Telefónica El Salvador to América Móvil, which operates in the country under the Claro brand. Due to regulatory hurdles, América Móvil at the end of 2020 decided against buying the company. After some delay, Telefónica sold the unit in October 2021, though at a considerably reduced price.

BuddeComm notes that the pandemic continues to have a significant impact on the telecoms market. On the consumer side, spending on telecoms services and devices is under pressure from the financial effect of large-scale job losses and the consequent restriction on disposable incomes. However, the crucial nature of telecom services, both for general communication as well as a tool for home-working, has offset such pressures. In many markets the net effect has been a reduced (and sometimes negative) subscriber growth.