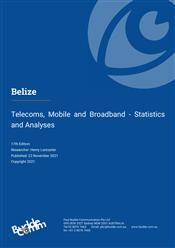 One of the smaller countries in Central America, Belize in many respects has closer affinities with English speaking countries of the Caribbean than with its immediate neighbours.

Belize’s fixed-line teledensity and mobile penetration remain lower than average for the region, a legacy of insufficient market competition and underinvestment in telecoms services, exacerbated by lax managerial standards within the incumbent telco Digi. However, Digi has recently adopted a reforming strategy, partly expressed by its rebranding in August 2018 as it aims to transform itself at all levels into an effectively competitive operator more commercially minded and focussed on cheaper pricing and customer retention. The company has undertaken significant investment in infrastructure, launching an LTE-A service at the end of 2016 and in mid-2017 completing a submarine cable to Ambergris Caye, enabling it to launch an FttP service in San Pedro. Loans secured since 2017 enabled the company to migrate its infrastructure from legacy copper to fibre. BTL invested BZ$93 million dollars to provide high speed broadband to 80% of residences across Belize.

The Belizean telecom market was liberalised in 2003 yet Digi continues to hold a monopoly in fixed-line services, and it remains the dominant provider of mobile and broadband services. In 2009 the state renationalised Digi after a change of government brought to light a questionable Accommodation Agreement between the previous administration and the company. Although the rationale for the nationalisation was to improve conditions for consumers, Digi’s prices remained high. The government has undertaken some measures to improve competition, notably by obliging Digi in mid-2013 to open its networks to VoIP services. In mid-2015 the government came to an agreement regarding an outstanding $22.5 million loan signed off in 2007 by a former Digi management team which the company subsequently considered unlawful. Digi was obliged to repay the government from its own funds. In November 2017 the government made the final payment to Digi’s former owners following the renationalisation of the company in 2009.