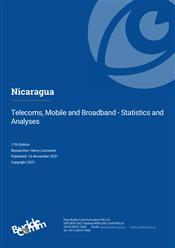 Nicaragua is the largest and least densely populated country in Central America. The country’s steady GDP growth since 2010 belies the low economic base, given that it has the lowest GDP per capita in the region, with some 60% of the population living below the poverty line. As a result, much of the economic drive has been the result of international assistance, particularly from the World Bank and other agencies.

The proposed construction of a canal between the Pacific and Caribbean with Chinese funding incorporates deep-water ports, an oil pipeline, railroad, and international airport is an ambitious attempt to deliver greater economic benefits to the country. The project is indicative of China’s economic encroachment in the region. However, the project has not started due to the negative environmental impact and questions around its viability.

Nicaragua’s telecoms market has mirrored the country’s poor economic achievements, with fixed-line teledensity and mobile penetration also being the lowest in Central America. The fixed line broadband market remains nascent, with population penetration below 4%. Most internet users are concentrated in the largest cities, given that rural and marginal areas lack access to the most basic telecom infrastructure. Internet cafés provide public access to internet and email services, but these also tend to be restricted to the larger population centres. To address poor infrastructure, the World Bank has funded a project aimed at improving connectivity via a national fibre broadband network. There are separate schemes to improve broadband in eastern regions and provide links to Caribbean submarine cables.

América Móvil’s Claro has a clear lead in all of Nicaragua’s telecom sectors, including fixed-line, mobile, broadband, and pay TV. The number of mobile subscribers overtook the number of fixed lines in early 2002, and the mobile sector now accounts for most lines in service.

Telefónica sold its operations in Nicaragua to Millicom in 2019. Millicom’s Tigo (previously Telefónica’s Movistar) is the only company competing with Claro in the fixed-line and mobile market. In the mobile sector, Tigo holds almost a third of the market, but in the fixed-line sector it has only about 10% market share.

Due to a weak regulatory structure and bureaucratic delays, further liberalisation has been a slow process. The market duopoly has dampened the competitive drive between the two main players, and as a result there has been less effort than in neighbouring countries to improve quality and lower prices. Nevertheless, there are other companies operating in the market, including the Russian state corporation Rostejnologuii, Yota Mobile and IWB Holding. In the mobile market China’s Xinwei Nicaragua (Xinwei Intelcom) launched services in early 2016, operating under the CooTel banner.