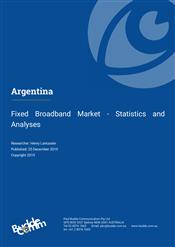 Argentina has one of the highest broadband penetration rates in Latin America, supported by investment among operators as well as a number of government programs aimed at extending the reach of services. Although the country’s economic and political difficulties during the last decade have impacted on sector investments there have been steady improvements in recent quarters, with a considerable proportion of investment being earmarked for expanding fibre networks beyond areas of the principal cities. This work has had a positive effect on the delivery of services, with the average download speed having increased from 5.3Mb/s in the first quarter of 2016 to 12Mb/s by the fourth quarter of 2017 and to 20.3Mb/s by the second quarter of 2019.

The market still suffers from limited competition, with the two fixed-line incumbents Movistar (known as Telefónica de Argentina before a rebranding exercise in April 2018) and Telecom Argentina dominating the DSL platform. These operators offer similar services and together control about two-thirds of all fixed-line broadband connections. The only meaningful competition was from the cable modem platform, which was owned by Grupo Clarín’s Cablevisión unit until early 2018 when it was acquired by Telecom Argentina. The merger of the two companies (approved by the competition authorities in June 2018) was made possible following an early 2017 decree allowing telcos to branch into the cable TV sector.

A national connectivity plan, dubbed ‘Argentina Conectada’, involves the deployment of broadband services and free-to-air digital TV to underserved parts of the country. The plan was launched in late 2010, with the state-owned satellite company ARSAT responsible for the project. In August 2016 ARSAT also became a partner in a project to deliver low-cost broadband to 1,200 localities across the country. The project is expected to cost ARS4.53 billion, of which ARS3.66 billion will be used to connect localities to the Federal Fibre-Optic Network (REFEFO), which is comprised of a federal backbone network made up of thirteen geographic regions, as well as provincial networks interconnected to the backbone. The network will span 58,000km and connect around 2,600 localities, accounting for 90% of the population. By late 2019 the project had been largely completed.

This report provides an overview of Argentina’s fixed and fixed-wireless broadband markets, accompanied by statistics, analyses, and subscriber forecasts to 2024.