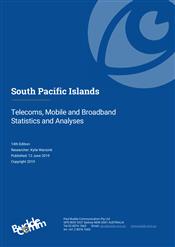 This BuddeComm annual publication provides valuable information, analyses and current statistics on the telecoms markets of the seven largest countries in the Pacific region. It focuses on the markets of Papua New Guinea, Fiji, The Solomon Islands, Vanuatu, French Polynesia, New Caledonia and Samoa.  The report includes a regional overview, identifying the key trends and leading operators. It provides insights into the mobile market of each country including mobile subscriber and mobile broadband statistics. Information on the fixed broadband market and statistics is also included with a particular focus on submarine cable and satellite developments.

The South Pacific Islands are benefitting from improved telecoms infrastructure

The South Pacific Islands have recently attracted international interest due to the infrastructure developments occurring in this unique part of the world. In particular, there have been numerous submarine cable build-outs and expansion of satellite services.

The demand for data based services in the Pacific region is growing, aligning with similar trends around the world. In particular, the demand for mobile broadband is increasing due to mobile services being the primary and most wide-spread source for Internet access across the region.

It is the second largest island of Fiji which is currently considered to be one of the key markets to watch due to it being the most advanced economy in the Pacific island region as well as hosting the highest mobile and Internet penetration. It is also leading in terms of preliminary 5G readiness.

The third largest island, the Solomon Islands, still relies upon 3G mobile and satellite services as its primary means of both communication and Internet access and it will benefit from the submarine cable and satellite developments occurring within the region.

While there are many local operators, there are also regional players including Digicel, which has operated in the Pacific for some time. Recently we have also seen Amalgamated Telecom Holdings (ATH) from Fiji expanding regionally with various acquisitions.

International organisations such as United Nations, The World Bank and Asian Development Bank have taken a special interest in seeing the general living conditions as well as communication services improve in the Pacific region. It has become recognised that access to high-speed internet can vastly improve the economic and social conditions in these emerging markets; many of which are prone to natural disasters and rising sea levels.