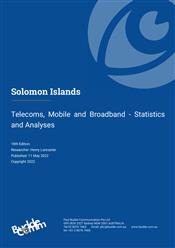 Telecommunication infrastructure in the Solomon Islands requires significant investment due to the geographical make-up of the islands. This presents a great challenge to rural connectivity in the country. Although various international organisations such as the World Bank and the Asian Development Bank have taken a special interest in having communication services improved in both the Solomon Islands and the Pacific region in general, internet and broadband penetration remain low. The provision of broadband infrastructure, particularly to rural areas, is also hindered by land disputes.

Internet services have, however, improved with the build-out of the Coral Sea Cable System linking Papua New Guinea to the Solomon Islands, as also with a connecting cable to a landing station at Sydney. The Australian government provided most of the funding for the Coral Sea Cable System, with contributions and support from the Solomon Islands and Papua New Guinea governments.

The launch of the Kacific-1 satellite in late 2019 also improved broadband satellite capacity for the region, though for telcos in Solomon Islands satellite services are now largely used as backup for international traffic.

In recent years, the country has stabilised both politically and economically and this, along with improvements to mobile infrastructure, has led to a rise in mobile penetration and the slow uptake of broadband services. While the first LTE services were launched in late 2017 in the capital Honiara, the main platform for mobile voice and data services remains 3G, while in outlying areas GSM is still an important technology for the provision of services.

Geopolitical concerns have also come to the fore as the government pursues stronger ties with China. This is a growing source of tension with Australia, which is the Solomon Islands’ largest aid donor. In April 2022, the country signed a security agreement with China, although the full details of the agreement have not been published.

BuddeComm notes that the outbreak of the pandemic had a significant impact on production and supply chains globally. However, the telecoms sector, has benefited from a rebound in mobile device production during 2021.

On the consumer side, spending on telecoms services and devices is under pressure from the financial effect of large-scale job losses and the consequent restriction on disposable incomes. However, the crucial nature of telecom services, both for general communication as well as a tool for home-working, has offset such pressures. The market is thus expected to continue a positive growth trajectory through 2022.