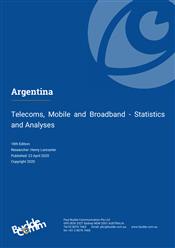 This report provides a comprehensive overview of trends and developments in Argentina’s telecommunications market. The report analyses the fixed-line, mobile and broadband sectors. Subjects include:

Argentina has an advanced telecom infrastructure though considerable investment is still required to update services in rural areas. To meet pent up demand for telecom services the government has embarked on a large-scale National Broadband Plan. By late 2019 the ARS4.53 billion program to extend broadband services to rural communities, managed by the state-owned infrastructure operator ARSAT, was mostly complete.

Argentina has one of the most dynamic mobile markets in Latin America and is the third largest in the region after Brazil and Mexico. Mobile penetration has fallen in recent years in line with a reduction in the number of subscribers following a long period of steady annual growth. This is partly due to pricing competition among operators which has reduced the incentive for multiple-SIM card ownership. The regulator has encouraged the market entry of additional MVNOs to increase competition. Market changes are anticipated in 2020 if Telefónica Group completes its plan to sell its business unit in Argentina, as part of a wider effort to exit Latin America though retaining its interests in Brazil.

Operators have trialled 5G though given the continued capacity of LTE infrastructure it is unlikely that commercial 5G services will be available before 2021.

Argentina also has one of the highest broadband penetration rates in Latin America, supported by investment among operators as well as a number of government programs aimed at extending the reach of services. Although the country’s economic and political difficulties during the last decade have impacted on sector investments there have been steady improvements in recent quarters, with a considerable proportion of investment being earmarked for expanding fibre networks beyond areas of the principal cities.

This report provides an overview of Argentina’s telecom market and regulatory environment, including statistical data and analyses on recent market developments. The report also reviews the fixed and fixed-wireless broadband markets and as well as the mobile voice and data segments, with profiles of the major operators and analyses on technologies deployed and market dynamics. The report in addition provides a number of subscriber forecasts to 2024.