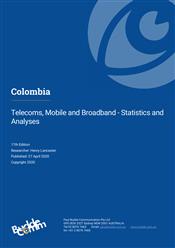 This report provides a comprehensive overview of trends and developments in Colombia’s telecommunications market. The report analyses the fixed-line, mobile and broadband sectors. Subjects include:

Colombian government aiming to sell its stake in a leading telco

Colombia’s telecom infrastructure is reasonably well developed in the main business centres, where service availability is relatively high by regional standards. However, infrastructure remains poor in small urban centres and rural areas. The government has sought to address this with a number of public programs, supported by effective regulatory instruments, and has facilitated the entry of operators to the mobile market in a bid to improve competition and extend the availability of mobile broadband services nationally.

Colombia has about 20 local telephony providers, operating municipally, regionally, or nationally. Many of these started as private companies, but later became public concerns owned by their respective municipalities. The number of lines in service continues to fall steadily, with customers abandoning traditional phones in preference for mobile connectivity. As in other Latin American countries, most of the existing fixed telephone lines are concentrated in the larger cities, leaving the rest of the population under-serviced.

Broadband penetration is relatively high for the region, though growth in the sector has been hampered by poor fixed-line infrastructure in many of the country’s 32 departments. The government has launched several initiatives to increase broadband take-up, including the National ICT Plan 2008-2019 and the Live Digital for the People 2014-2018 program. These efforts have had considerable success, leading to far higher growth in the number of broadband subscriptions among the lower socio-economic groups in recent years. DSL has a declining market share, and fibre-based broadband has developed strongly though most infrastructure as yet is concentrated in high-density urban areas.

Growth in the mobile market has slowed in recent years though it retains significant potential, particularly in the mobile broadband sector where penetration is still low and where strong demand exists in rural areas where fixed-line infrastructure is poor. Claro, Movistar and TigoUne dominate the mobile market though a number of MVNOs are also active.

This report provides an overview of Colombia’s telecom market and regulatory environment, together with profiles of the major fixed-line operators and a range of statistics and analyses. The report also covers the fixed and fixed-wireless broadband markets, together with statistics and subscriber forecasts. In addition the report assesses the mobile market, including profiles of the major operators as well as analyses on market developments and emerging technologies.