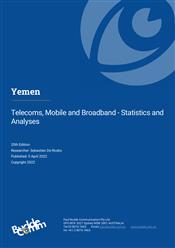 Until telecom infrastructure can be improved across Yemen, and until civil unrest eases, there will be little progress for the sector. MTN Group in November 2021 completed its exit from the country, having incurred losses for several years, and considered that continuing its presence in this market was no longer worth its while.