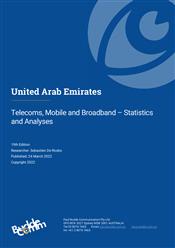 The UAE has a strong mobile market, dominated by Etisalat and du. Both are majority-owned by the government. In a bid to attract additional foreign investment, it was resolved in early 2021 that the stake held by foreigners in the two companies could be increased.

Etisalat and du have deployed LTE networks providing national coverage, while the 5G penetration rate is the second highest globally after China. This has underpinned growth in the mobile broadband sector, and has enabled the strong development in the take-up of rich content and applications, as well as m-commerce. To help increase the capacity of 5G networks in coming years, and so keep up with data demand, the government has allowed for the GSM networks to be closed down and for spectrum and other assets to be re-purposed for 5G by the end of 2022.

The fixed-broadband network in the UAE is dominated by fibre, with DSL having a minor and declining presence. This focus on a fully fibred infrastructure has also facilitated growth in e-commerce, and has supported the government’s long-term aim of transitioning the economy from its dependence on oil to being knowledge-based and supported by digital services.

The country stands to benefit from having signed the Abraham Accord Declaration with Israel, which aims to normalise relations between the two countries. Such benefits can be seen in the agreement to enable local ISPs to access Bezeq International’s submarine cable infrastructure, and so improve direct connectivity to Europe, South East Asia, and Africa. The UAE’s ISPs can also access Bezeq International’s data centre in Tel Aviv, improving internet services.