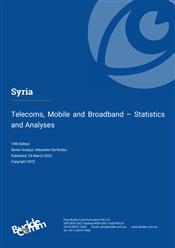 The years of civil war and destruction to infrastructure continue to have a toll on the telecoms sector in Syria. Although over the years the major mobile service providers Syriatel and MTN Syria have endeavoured to restore and rebuild damaged networks, the operating environment has been difficult. Following disputed demands for back taxes, MTN Group in August 2021 exited the country, after its majority stake had been transferred to judicial guardianship. This effectively meant that the mobile market became a monopoly, with Syriatel as the only operator. Nevertheless, in February 2022 the regulator awarded a third mobile licence, to Wafa Telecom, following a process which had been ongoing for many years.

Telecommunication services in Syria are highly regulated. Although urban areas can make use of the network built and maintained by the government-owned incumbent Syrian Telecommunications Establishment (STE), many underserved remote areas in the countryside are obliged to rely on satellite communications. The domestic and international fixed-line markets in Syria remain the monopoly of the STE, despite several initiatives over the years aimed at liberalising the market.

Mobile broadband penetration in Syria is still quite low, despite quite a high population coverage of 3G networks and some deployment of LTE infrastructure. This may provide potential opportunities for growth once infrastructure and economic reconstruction efforts make headway, and civil issues subside.