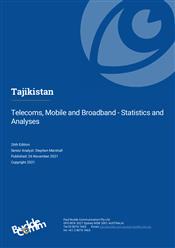 Of all the former Soviet republics, Tajikistan’s telecommunications infrastructure was arguably the least developed. With a telecom network that was near total collapse, the government had the daunting task of bringing it up to modern standards. Despite the launch of 4G/LTE services, the overall the telecom sector has continued to struggle. Tajikistan still has one of the lowest fixed-line penetrations in the Asian region and one of the lowest broadband levels of broadband penetration.

Tajikistan’s mobile sector has been on a strong growth path for over a decade. It continues to be the standout feature of the country’s telecom industry. However, as the market has moved closer to a saturation phase there has been an inevitable reduction in the growth rate and. only moderate growth is predicted over the next five years.

Tajikistan has seen a strong increase in mobile broadband penetration over the past four years, though the market is still at an early stage of development and penetration remains relatively low compared to other Asian nations. Steady growth is predicted over the next five years, supported by the rising number of mobile subscribers, and increasingly faster speeds offered by the mobile operators as they roll out their 4G networks. Tariffs should improve due to strong competition, though the regulator has imposed SMP conditions on all operators, which makes it difficult for them to adjust tariffs to suit market conditions.