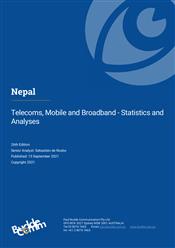 In relation to its telecom sector, Nepal has several topographical and economic constraints which have impeded efforts to expand network infrastructure and improve the quality of service for end-users.

The fixed line market remains underdeveloped, and as a result most traffic is channeled via mobile networks. Fixed broadband penetration remains very low, though to address this the government has initiated several programs as part of the Digital Nepal Framework and the wider Optical Fibre Backbone Network Expansion Project, started in 2012. Supported by the Rural Telecommunications Development Fund, the programs include building out fibre backbone infrastructure and using this to provide broadband to schools and community centres nationally.

Telcos have also invested in fibre networks, and competition in the market is intensifying. Cheap fibre-based services launched by CG Net in mid-2021 prompted responses from other ISPs to provide faster and more competitively priced offers.

Nepal’s mobile market is relatively developed, with a focus on LTE. In 2021, the regulator considered a range of spectrum bands which could be used for 5G, while Nepal Telecom was charged with trialing services in five cities.

BuddeComm notes that the pandemic continues to have a significant impact on production and supply chains globally. During the coming year the telecoms sector to various degrees is likely to experience a downturn in mobile device production, while it may also be difficult for network operators to manage workflows when maintaining and upgrading existing infrastructure. Overall progress towards 5G may be postponed or slowed down in some countries.